Old Fashioned German Potato Salad is dressed with a dijon vinegar dressing and can be served either hot or cold.

What is German Potato Salad called in German?

Kartoffelsalat is the name of German Potato Salad in the German language.

Either! German Potato Salad can be served either warm or cold. It’s a matter of personal preference, and it is delicious either way.

Storage of Leftovers: When chilling, you can simply cover the bowl in plastic wrap and place it in the fridge. For longer term storage, this salad should be stored in an airtight container in the refrigerator. Since it can be enjoyed cold, no reheating is required. 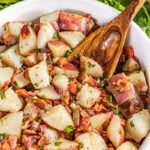