This Authentic German Schnitzel Recipe has been passed down for generations. Use this same method for pork schnitzel, veal schnitzel (weiner schnitzel), or chicken schnitzel.

This recipe has been passed down in my German family for generations. Our secret addition includes a squeeze of lime in the breading. The breading is very simple, but creates a wonderfully crunch shell around the meat. Schnitzel is best enjoyed fresh and hot from the pan.

While various types of breaded and fried cutlets are popular in many countries, it is particularly associated with German cuisine. In German, there are several different words that are used to refer to different types of schnitzel, depending on the type of meat that is used.

One of the most common types of schnitzel is the “Wiener Schnitzel,” which is made from veal. This word comes from the German word “Wien,” which means “Vienna,” as this dish is said to have originated in the Austrian capital.

Another common type of schnitzel is the “Jägerschnitzel,” which is made from pork and served with a mushroom sauce. This word comes from the German word “Jäger,” which means “hunter,” as this dish is said to be a favorite among hunters.

There are also other types of schnitzel that are made from different types of meat, such as chicken, turkey, or lamb. These are typically referred to simply as “schnitzel” with the type of meat included in the name, such as “Hähnchen-Schnitzel” (chicken schnitzel) or “Lamm-Schnitzel” (lamb schnitzel).

Veal schnitzel is made from the meat of a young calf and is considered the traditional cut for this dish. It is lean and tender, with a delicate flavor that pairs well with the crispy breading. To make veal schnitzel, use boneless veal chops. The meat should be pounded thin with a meat tenderizer before using in this recipe.

Pork schnitzel is a more budget-friendly option and is often more readily available in supermarkets. It is made from boneless pork loin. Pork schnitzel has a slightly richer flavor than veal and is a good choice for those who prefer a heartier dish.

Chicken schnitzel is another popular variation of this dish. It is made from boneless, skinless chicken breasts that are pounded thin before coating. Chicken schnitzel is a lean and healthy option, and is a great choice for those who are looking for a lighter alternative to veal or pork.

In addition to these traditional cuts of meat, schnitzel can also be made with other types of meat, such as turkey, lamb, or beef. Whichever cut of meat you choose, the key to making a great schnitzel is to pound the meat thin and evenly, so that it cooks quickly and evenly in the pan. Serve your schnitzel with a side of mashed potatoes and steamed vegetables, and top it with a squeeze of lemon juice for a delicious and satisfying meal.

Schnitzel is often eaten plain with just a bit of freshly squeezed lemon juice, but can also be served with a sauce. One of the most common sauces is creamy mushroom gravy, also known as Jägerschnitzel.

If you like this recipe, you may be interested in these other delicious recipes that go great with schnitzel: 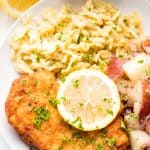