Haluski is an easy to make one skillet dinner that is full of comfort food flavors and only requires a handful of ingredients. Your family will love this easy dinner!

The origins of Haluski (pronounced ha-loosh-key) are debatable, but can be claimed in some form or another by the Polish, Slovaks, Ukrainians, and Hungarians. It’s a simple comfort food dish consisting of either egg noodles or a potato dumpling sautéed with cabbage, onion, pork, and sheep or goat’s cheese. The cut of pork you use, the kind of cheese you use, and using either noodles or dumplings will vary from region to region.

American immigrant haluski is made with ingredients that were easier to find in the US and often use noodles. This recipe is an easy version of Haluski that is made in the style of US immigrants. It’s not an authentic version of Haluski that you’d find in Eastern Europe as many of those ingredients just aren’t common in the United States. Slovak-style haluski uses cheese, while other Eastern European nations like Poland and Ukraine do not usually use cheese. We’ve included some information for making a more traditional Slovak Haluski if you are interested in giving it a go. However you decide to make it, haluski is an easy to make comfort food that only requires a handful of ingredients.

How do I make traditional Slovak potato dumplings for my haluski?

Make your dough by grating your potatoes on the smallest shredding option on your cheese grater. Squeeze the excess water out and put the shreddings into a mixing bowl. Stir in the flour, baking powder, salt, eggs, and milk until a dough forms, adding more flour if necessary to achieve a workable consistency. Divide the dough into 6 sections. On a flour dusted surface, roll out each dough section into a long rope or snake. Slice the snakes into 1/4 inch wide “pillows” or dough ball sections. Set aside the cut dumplings until ready to cook. Bring a large pot of salted water to a boil. Working in batches boil the potato dumplings for 3 minutes each batch. Remove from the water with a slotted spoon.

Can I use bacon instead of pancetta?

Yes! Bacon is an acceptable substitution for pancetta in this recipe. It produces a lot more fat and grease so we recommend skipping the butter in this recipe (or reducing it significantly) and simply cooking up your diced bacon in the skillet and allowing the cabbage and onion to sauté in the grease.

What can I use instead of goat cheese?

Bryndza (a sheep’s cheese) is the traditional cheese used in haluski, but it’s hard to find outside of Eastern Europe. Goat’s cheese offers a similar flavor and is more widely available. Instead of goat cheese, you can substitute with cream cheese for a mild option, or use feta for a bolder flavor. Mascarpone cheese is another option for a smooth, mild, creamy finish.

Store any leftovers in an airtight container in the fridge for up to 4 days. Reheat on the stovetop in a skillet over medium-low heat until warmed through.

If you like this recipe, you may also be interested in some of our other Eastern European favorites: 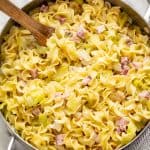 Haluski is an easy to make one skillet dinner that is full of comfort food flavors and only requires a handful of ingredients. Your family will love this easy dinner!
Prep Time 5 minutes
Cook Time 15 minutes
Total Time 20 minutes
Ingredients
Instructions
Notes

Haluski is an easy to make one skillet dinner that is full of comfort food flavors and only requires a handful of ingredients. Your family will love this easy dinner!
Prep Time 5 minutes
Cook Time 15 minutes
Total Time 20 minutes
Ingredients
Instructions
Notes