Old fashioned cobbler, made from scratch, is easier to make than you might think. 10 minutes of prep and you’ll have the best cobbler of your life!

I used to think that I didn’t like cobbler. Turns out I just don’t like cobbler made with cake mixes. Old fashioned cobbler made from scratch? It’s amazing! Every time I make it I can’t help but think, “Dang! I make the best cobbler!” It’s really easy to make too. For the topping, you can choose to be truly old fashioned and use a pastry cutter to cut the butter in, or you can add a little modern convenience to this recipe and pulse it together in a food processor. I won’t judge you either way, but let me tell you, the food processor is so much easier. You can cut down the prep time to 5 minutes that way. You can use this same recipe with any fruit really. Just substitute in 3 pounds of the fresh fruit of your choice. Just make sure it’s prepared first (peeled, sliced, pitted, whatever it needs).

Does cobbler have a bottom crust?

This is actually a hotly debated topic in some crowds, but by definition, no, cobblers do not have a bottom crust. Cobblers have a fruit bottom and are generally topped with a sweet biscuit dough, but can also have a more cake like consistency as well. Some people still swear by having a bottom crust on their cobbler, but it is not a traditional preparation.

What’s the difference between a cobbler and a crisp?

Can I halve this recipe?

Yes you can! This recipe, as written, makes an entire 9×13 pan which might be a bit much for some people. You can directly halve all of the ingredients in this recipe and make a 9×9 pan instead.

Seriously, it’s so easy to make! Don’t believe me? Watch the video below where I walk you through every step on my very own cooking show. Check out my channel on YouTube and be sure to subscribe! 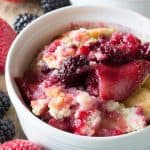 Old fashioned cobbler, made from scratch, is easier to make than you might think. 10 minutes of prep and you'll have the best cobbler of your life!
Prep Time 10 minutes
Cook Time 1 hour
Total Time 1 hour 10 minutes
Ingredients
US Customary - Metric
Instructions
Notes

Just made this recipe for July fourth holiday. Used fresh picked blueberries and raspberries. Served to some of my down home country friends and everyone says this was gooooooood! Made the batter a little different from the recipe, didn’t have a food processor, so I mixed by hand and plopped the clumps on the berries. Turned out like scones sitting on top soaking up the berries underneath. Thank you for such a great recipe.

I have made different types of cobblers for many years believe me I am an older woman I come from the old-school, never had a bottom crust always made my own batter for the top which is very similar to what they are using, but it covered the whole top you did not drop it on by the spoonful you would spread it across the top of the berries it was a cake batter like not a cake mix but it was thin like that and it was excellent.

I grew up eating blackberry cobbler and they have been made in our family for over a hundred years. And are very popular here in the deep South. And a cobbler has no bottom crust, pies yes cobblers no. This is as. Close to my grandma’s cobbler as possible.

OK everybody, my Grandma from Italy would make this from berries or fruit, she would make the filling first, thick, wet, and gooey, then she made the cobbler dough which was a stickley semi sweet dough. She would pour the filling into a casserole dish then with a big spoon would drop big round clumps of Cobbler Dough all over it, and throw it in the oven at like 375 degrees for 45 min to an hour. what came out os somethings only the GODS would eat. She then served it up with homemade vanilla Gelato ! GOD I MISS… Read more »

You have the most awesome recipes!
I vote you for a food network star😉

My boys and I just tried this recipe. We picked the blackberries fresh from the backyard. Delicious!

Websters dictionary says a cobbler is a deep dish fruit dessert with a thick top crust. I’m sure the variances are just other peoples preferences.

I believe these is a lot of confusion between cobbler, crumble and a Betty …from what I understand a Cobbler is slightly wet ,crumble completely dry and the Betty wet.

When using fresh peaches, do you have to cook or blanch the peaches first?

I picked dewberries on my parents’ property & made this recipe to bring to our annual, neighborhood crawfish boil. It was a HIT. It almost looked like the Pyrex dish was licked clean! Question: Use a large lemon or a regular-sized / small-ish lemon for this recipe? I used the latter. I’m sure either would work, but was wondering if you’d clarify. Thanks for the recipe… it will be my go-to from now on. Also, if people want a thicker cobbler, just use a smaller baking dish. The fruit will happily bubble away, as it always does at that temp… Read more »

I had to substitute for the half and half and the lemon zest, but otherwise, this was most delicious!!
Thank you so much for the most wonderful recipe that I am saving!! It wasn’t the recipe I was looking for when I came looking, but I will most certainly make it again! My guests were most appreciative.

To make an 8 x 8 could you just half the recipe? I guess it would be okay to freeze half?

can I make this using GF flour?

Love your cobbler recipes. Made it with fresh peaches. First time making cobbler and liking the topping and not just the fruit. Added a teaspoon of almond extract to the batter then sprinkled it with turbinado surgery for extra crunch. So good, thanks for all the great recipes.

So delicious! Brings back memories of my grandmother💞 a scoop of vanilla ice cream & 🤩