Crispy fried pork chops are on the menu tonight! Thinly sliced pork chops are coated in a flavorful buttermilk mixture and dredging seasonings, and then fried in oil. You’re gonna love these!

If you’re looking for a tender and juicy pork chop, look no further. We’ve all eaten our fair share of overcooked, dry pork chops, and we are not about that. This recipe is also packed with flavor, which you don’t always expect from a quick meal.

Pork chops are amazing on their own, but with a milk gravy on top, these are downright addicting. Serve it up with creamy mashed potatoes, and your favorite veggie on the side, and you’re family will go nuts. You might want to make a couple extra pork chops, because one just won’t be enough!

When it comes to making fried pork chops, you really can go with either boneless or bone-in. Boneless pork chops are easier to eat, but bone-in pork chops cook more evenly.

We used a rib chop in this recipe. It has a large bone running along just one side, making it easy to find and pull out. Other cuts of pork you can use are: loin chop, boneless chop, or shoulder chop.

What should I serve fried pork chops with?

Mashed potatoes are amazing on the side. Fried Pork Chops can also be often found served smothered with a milk gravy. We also love to pair it with something green, either a crisp salad or roasted veggies, or both!

Store any leftovers in an airtight container in the refrigerator for up to 4 days. Reheat individual servings in the microwave in 30 second increments, or in an oven preheated to 350 degrees until warmed through. 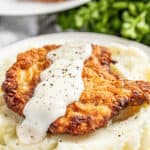 Instructions
Notes
Fried Pork Chops are often served drizzled with a basic milk gravy, though it is completely optional. It is very easy and simple to make.

Instructions
Notes
Fried Pork Chops are often served drizzled with a basic milk gravy, though it is completely optional. It is very easy and simple to make.