This Chicken Tikka Masala recipe is absolute perfection with a spiced yogurt marinade and a quick and easy masala sauce that is full of Indian flavors.

I’m a sucker for a good Tikka Masala. When I was in college there was a tasty Indian restaurant in town that was quite popular called The Bombay House. It seriously made me want to travel to India just to eat the food.  Granted, this isn’t an authentic Indian dish. It was actually made popular by Indian immigrants living in Europe and quickly became a classic.

Back to that little Indian restaurant. I’ve never had a dish there I didn’t like. A few years ago I took a friend there who claimed to hate Indian food because it was bland and boring. I had no choice but to force her to eat at this place because whatever Indian food she had in the past was obviously not good Indian food. She ended up being blown away!

Despite all of the wonderful, mouth-watering, full flavored dishes, there’s just something about a good tikka masala that just warms the soul. It’s total comfort food.

That creamy tomato goodness, spiced with the aromatic spices of India is comfort food to this white girl. I’ve kept the spicing rather mild by Indian standards in this recipe. It’s got some heat to it, but it definitely won’t burn your face off. And let me tell you, this is just as good at the restaurant. All you need to go with it is some steamed rice and naan (Indian flatbread).   I even have a recipe where you can make your own homemade Naan.

If you want to control or adjust the spice level in this recipe, you can cut down or eliminate the cayenne pepper all together. You can also try adding in only 1/3 of a jalapeno instead of the full amount. If you want to increase the spice level, I recommend doubling the amount of jalapeno or using a spicier pepper.

Watch the video below where I walk you through every step of this recipe in the very first episode of my cooking show in my newly remodeled kitchen! I’m pretty excited to finally be able to share it with you so be sure to check it out and subscribe so you never miss an episode. 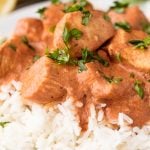 I have to say I tried your recipe it was amazing. I have to admit I have used many of your recipes. Great web site simple instructions and recipes. Thanks you you have broden and opened my eyes to great dishes.

That makes me happy to hear!

I recently started eating and cooking more Indian and Greek cuisines too. I’m in love with it. As an American who grew up on a farm and didn’t get to taste other cultures until my 20’s, I’m super grateful for interesting recipes… Indian or not. I’ll try anything with chicken and a spicy creamy sauce! Thanks!

Can I use boneless skinless chicken thighs? They have soooo much more flavor. I detest chicken tit. That being said, how many thighs or pounds should I use? Chicken breasts like human, highly variable in size and weight. Just sayin.

Like you Martha, I do not like breast of chicken in cooked dishes ( except chicken salad).. My Indian place will substitute much tastier. thighs always. Soooo much tastier!

Delicious! The only thing I different is broil the chicken instead to save time. Easy and tasty.

The flavors in the recipe are lovely , very tasty. However, if I follow the recipe exactly , I have a copious amount of yoghurt. This doesn’t appear to be the case in the video? Is it edited out. Also, how can 2 chicken fillets feed 4?? Thanks.

0
Reply
Rachel (The Stay At Home Chef)
Reply to  DMN

If you are using the correct amount of Greek yogurt (not regular yogurt), then you shouldn’t have a ton of extra yogurt. However, I suppose if you had smaller than average chicken breasts, that could result in more yogurt than necessary.

This recipe is delicious!

I just made this recipe this,evening and it was delicious!!! I didn’t use the jalepno nor the cilantro, but still was fantastic over Jasmine rice!

Can I cook in a slow cooker

I suppose you could, but the recipe isn’t designed for that.

Made this tonight. So yummy!! My 4 year old son even ate it!

Looks good…looking forward to try it…
Only thing, please get Basmati the, it’s my favorite.
Cheers

Would be great if you would use gramm/ounces and ml instead of cubs and all the other unprecise messurements. Thanks

Sorry. 90% of my readers wouldn’t be able to make the recipes if I used metric measurements.

I want to try this recipe, but I never heard of garam masala…….can I use sweet marsala wine ? and how much ?

Marsala wine is nothing like garam masala which is a blend of spices. You can make your own garam masala mix by following instructions here: https://twosleevers.com/home-made-garam-masala-recipe/

Thanks for the recipe!!

I made it today but it’s a little acidic. Should I add more cream or is there something else I can do?

Depends on why it is acidic. I’d expect a little more cream would help.

I’ve made this a few times and found that using a whole squeezed lemon made it too citrusy. I like to use 1 teaspoon of lemon juice instead and it made it much better. I love this recipe though and have now made it 4 times. It’s my boyfriend and I’s new favorite dinner!

Could this work as a freezer meal?

It should! The only thing you have to watch out for is the cream separating in the sauce.