Brussel Sprouts Au Gratin takes the classic most hated veggie of all time and drowns it in a delicious cheese sauce making it a yummy side dish that is hard to hate!

Brussel Sprouts are that classic veggie you either love or hate, but we think there is certainly too much hate in the world towards brussel sprouts. We understand though, because we only learned to love them as adults with this very recipe. Really though, if you are going to try any vegetable for the first time (or the first time as an adult), what better way to try it than smothered in a cheese sauce?! Au gratin is the way to go. Go on and give brussel sprouts a try.

What is au gratin sauce?

Au Gratin refers to a popular cooking method where something is topped off with seasoned bread crumbs and a cheese sauce and then browned.

Is it Brussels sprouts or brussel sprouts?

They are named after the city in Belgium so they are in fact Brussels sprouts with a capital B and an s at the end of each word. Sprouts is also correct because it is the plural, signifying there is more than one. You most often see it as brussel sprouts which is simply a very common misspelling. It is spelled “brussel” in Flemish so it is correct somewhere, but it has just become a very common misspelling which makes it widely accepted and more often searched for than brussels sprouts.

If you want the brussel sprouts to retain a bright green color, place them in boiling water for 1 to 2 minutes to shock them, and then drain. Then use in the recipe as directed.

Store any leftovers in an airtight container in the refrigerator for up to 4 days. Reheat individual servings in the microwave in 30 second increments until warmed through.

If you like this recipe, you may be interested in these other delicious veggie side dish recipes: 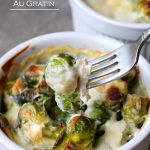 Brussel Sprouts Au Gratin takes the classic most hated veggie of all time and drowns it in a delicious cheese sauce making it a yummy side dish that is hard to hate!
Prep Time 10 minutes
Cook Time 1 hour
Total Time 1 hour 10 minutes
Ingredients
US Customary - Metric
Instructions
Notes