Cinnamon Roll Twist Bread gives you an impressive way to present the classic cinnamon roll flavors. And it’s a lot easier than it looks!

This post is sponsored by Princess Cruises. All opinions expressed are my own.

I recently took a trip aboard The Regal Princess cruising around the Baltic Sea. One of our ports was Tallin, Estonia. I wasn’t sure what to expect from the country as I had barely even heard of it before the trip. It ended up being one of my favorite stops! It’s such a charming city as the old city is one of few in Europe that has a standing city wall surrounding it. The medieval charm will win you over!

With every stop on our trip I had researched foods from the region and listed out foods I wanted to try. You should check out our entire trip itinerary because you’ll see immediately that my list was absolutely fabulous based on the countries we were traveling to! In Estonia we went out in search of a kringle, a cinnamon bread pastry presented in a twisted shape. On our quest for kringles we also stumbled upon plenty of other fabulous eats including an incredible authentic medieval style lunch. Fun fact, they didn’t eat potatoes in medieval times.

We stopped in every bakery we came across and ended up experiencing way more than just kringles. We simply walked in and ordered every pastry that looked good. They were all winners except for one. It looked like it might have some kind of tasty filling in it, but that filling ended up being a boiled egg and pickled fish. I’m a pretty adventurous eater, but that was too much for me. But that’s the joy of travel right? Language barriers end up getting you to try things you may not have had you been able to read the label!

Tallin was absolutely charming. We climbed up every tower we could, including the top of one of the quaint old churches. My thighs were on fire by the end of the day but it was worth it for the spectacular views.

The old town is full of cobblestone streets, colorful doors, and quite a large number of churches. We spent our day there exploring it all. Should I ever have the opportunity to go back I’d be sure to schedule a tunnel tour to explore underneath the city as well. We had hoped to take advantage of a special excursion that involved cooking, but alas, it was canceled at the last minute.

I highly recommend a visit to Estonia should you ever get the opportunity. Our Scandinavian Cruise with Princess Cruises was a trip of a lifetime. I still have to make sure it wasn’t all just a wonderful dream. The whole experience was so relaxing, rejuvenating, and adventurous all at the same time. I can’t believe we were able to see so much while traveling by ship! Princess is launching its new Ocean Medallion Program later this year and it’s only going to make the cruises experience even better.

Now on to the recipe! This bread is inspired by our time in Estonia. All of the pastries and breads we tried were so amazing, I decided to take some inspiration from this beautiful old city and turn it into a fun recipe for home.

I’ve taken my famous Cinnamon Rolls and twisted them into a braided wreath that is so beautiful and impressive, yet this recipe is probably even easier to make than cinnamon rolls! This bread is perfect for a brunch or special occasion where you want to impress your guests. It’d also make a great gift to bring to neighbors or friends in need of some deliciousness.

The key to success in this recipe is to pay close attention while shaping the wreath. Roll your bread up as tightly as you can and then twist it together as tight as you can as well. When you bring it into a circle, tuck the ends in well underneath. You can also snip off any extra dough if your ends seem to be heavy on the dough side and not have much filling in them.

Be sure to check out the other recipes inspired by my trip including Baklava Cinnamon Rolls,  Easy Norwegian Waffles, and Key West Cooler Mocktail. Each recipe is based off of, or inspired by things I ate on my trip around the Baltic Sea with Princess Cruises. Denmark, Norway, Germany, Estonia, Russia, Finland, and Sweden were all visited on this trip. You can see already why I call it the trip of a lifetime! 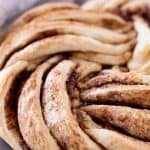