You’ll never guess the secret ingredient in this Restaurant Style Fried Chicken. It makes for a sweet and crispy crust that just so happens to be gluten-free. 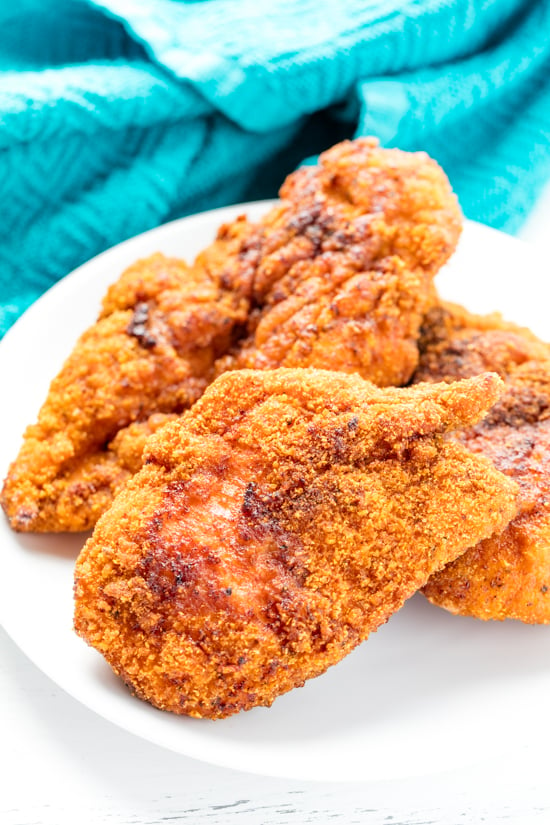 This recipe was given to me by my friend Chef Chad Pritchard, an award winning chef. His most recent endeavor is a fried chicken restaurant called Love Me Tenders. This recipe is all about the secret ingredient, which is used in everything from small fried chicken establishments to high end restaurants. The secret is Captain Crunch Cereal. Who would have ever guessed?

The cereal crust provides a sweet, crunch exterior that is to die for! It is just so finger licking good. The chicken is seasoned and dredged in cornstarch then dipped in a water and egg mixture. Water is often used in restaurants to keep costs down. The water and cornstarch combination creates almost a glue to keep the cereal coating on. It also happens to make this fried chicken gluten free.

Disclaimer: Captain Crunch does not contain any wheat products, however, it still may be subject to cross contamination. You can read their disclaimer here. If you are uncomfortable with potential cross contamination to a severe gluten allergy, there are lots of Cap’n Crunch knock offs available at health food stores, or you can use crushed potato chips instead.

In this recipe, I’ve called for boneless skinless chicken breasts, as they are the easiest to work with and produce the best results with this coating. You can also use chicken drumsticks and thighs, but you will need a longer cooking time and the crust will become a much darker brown.

How to Fry Chicken

Chicken should be fried in a high smoke point oil like vegetable, canola, or peanut oil. The oil itself should be kept at about 350 degrees F for best results. Chicken should be dredged, dipped in a wash, and coated with a flavored outer coating before frying. Different cuts of chicken will require different cooking times. White meat requires less cooking than dark, and boneless cuts require less cooking time than bone-in. Size also plays a factor with smaller cuts requiring less cooking time. Chicken needs to be cooked to an internal temperature of 165 degrees Fahrenheit. Use a meat thermometer for best results.

If you like this recipe you may also be interested in my Fried Chicken Stuffed Baked Potato where I take fried chicken and stuff it into a baked potato. It’s ridiculously good! For a more traditional fried chicken check out my Cajun Fried Chicken recipe which is equally as finger-licking good.

Watch the video below where I walk you through every step of this recipe, including tips and tricks along the way that will be helpful to you. 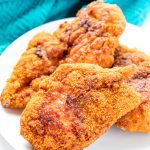 This is really looks delicious. I will try this later, and I will use boneless, skinless thighs because that’s only available right now in here.

I use Boneless, skinless thighs. I think that they are much better.

This was a great recipe although it took so much longer to cook the boneless skinless breasts. What size breasts should I be using and will most grocery stores cut them to size for me?

Yum this recipe looks delicious! I’m making this tonight. Can I use Crisco shortening to fry?

I do not fry, can it be baked?

I have no tested that.

They don’t sell Captain Crunch in Australia. What can I use to substitute it?

Any similar corn based cereal.

Looks delicious! I am gonna try one! Thanks, Rachel.