This Pie Crust is buttery, flaky, delicious, and totally fool proof thanks to a secret ingredient that allows you to roll and re-roll as many times as  you need to without losing that perfectly flaky crust.

When it’s pie time, are you tempted to reach for the prepared crusts at the grocery store? It could be that making crust feels like an extra hassle on top of all of the other cooking and baking, or maybe you haven’t made great crusts in the past, so you would rather not risk it. You can put all of that behind you! This recipe is awesome because it is simple, it makes a perfect crust, and you can make crusts in advance and freeze them for the anticipated pies. It doesn’t require a whole lot of effort, and the payoff is amazing.

This recipe uses a technique for making pastry that cuts cold butter and shortening into a mixture of flour, salt and sugar. The reason for this cutting-in of the butter, is to create tiny little pockets of fats that in turn create layers of buttery, flakiness. This step can be done with a pastry cutter or blender or even in a food processor. Once that coarse mixture is made, you will add chilled water and vodka. This brings the dough together without over-combining those little pockets of butter and shortening. After that, the dough is chilled and then rolled into your pie crusts. It’s just that simple! You will love the way these crusts turn out. Follow the included instructions for pie crusts that need to be baked in advance.

Butter versus Shortening in Pie Crusts

Pie crusts require a fat and which fat you choose is a matter of personal preference. Butter, shortening, and even lard are the most popular options and each can be used interchangeably in the same quantities, but the results will be slightly different due to how each of these fats interact when binded with flour and exposed to high high heat.

How to Cut Butter or Shortening into Flour:

What should you put in that awesome crust? Check out these fantastic pie recipes: 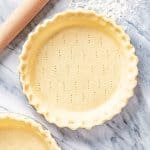 This Pie Crust is buttery, flaky, delicious, and totally fool proof thanks to a secret ingredient that allows you to roll and re-roll as many times as  you need to without losing  that perfectly flaky crust.
Prep Time 15 minutes
Cook Time 15 minutes
Chilling Time 1 hour
Total Time 1 hour 30 minutes
Ingredients
Instructions

Notes
FOOD PROCESSOR INSTRUCTIONS Make the dough in a food processor by combining half of the flour, sugar, and salt together and pulsing until combined. Add in the butter and shortening pieces and process for about 15 to 20 seconds, until combined. Add in the remaining half of the flour and pulse until all the flour is incorporated. Sprinkle in cold water and vodka and pulse 5 or 6 times until combined into a dough. Divide into two even pieces and wrap in plastic wrap. Refrigerate 1 hour.

Rachel you are awesome! This is the perfect pie crust! I have used several different recipes to make pie dough over the years and this is the first time it came out absolutely perfect! It’s buttery and flaky and delicious, I am in love! My husband was so happy to eat his chicken pot pie with this crust! i will never deviate away from your recipe! You are a real inspiration 🙂

OMG ?! I just made Chicken pot pie with your recipe and it is amazing delicious.
Thank you very much

hi Rach what can I use instead of vegetable shortening

The liquor really made a difference. My go-to recipe from now on! Plenty of dough for a 9″x13″ double-crust pie.

I have been making pies with gluten free flour and butter. Using my Cuisinart to mix the dough. It’s sketchy whether the crust is easy to handle or not. Question: is this recipe adaptable to gluten free flour? Should I use Xantham Gum in the recipe?

For a pastry I highly recommend using a recipe that is specifically designed for gluten free flour.

The recipe includes this sentence: “Use a fork to prick holes into the bottom of the crust.” I did not see this in the video. What did I miss? I’ve never poked holes in my pie crust. Would this not make the filling stick to the pan?

It’s an optional step that is meant to keep the empty crust from bubbling up with air bubbles.

This was the Best piecrusts I have ever made.