Fried pancakes. That’s right, fried pancakes. They are like a heavenly mix of a donut and a pancake. Are you ready for a crazy good recipe? You may look at the ingredients and say to yourself, “hey, that looks just like a buttermilk pancake.” I thought the same thing. Let me tell you, these are a far cry from a buttermilk pancake. These babies are fried, crispy on the outside, light and airy on the inside. It’s like some kind of donut pancake and it is pure deliciousness.

Fun fact: this recipe is based on a classic Russian breakfast called Oladi. Our Russian friends apparently eat these with jam and sour cream. We enjoyed ours with fresh berries and sour cream. Now, you may be a bit skeptical about the sour cream. Just trust me on this one. Russian sour cream is a bit different than the American kind (higher fat content), but it’s served with practically everything. They are on to something here because the sour cream was a tasty touch. You really must try it with sour cream. For reals. 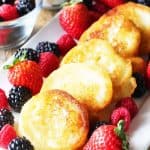 Just a quick note to express my thanks and gratitude for your AMAZING recipes. You have been a “GODSEND” throughout this pandemic. You have graced out table and enhanced our palates with yourecipe and personality. Thank you so much for EVERY mouth-watering delight.

Let me preface this with I CANNOT COOK! This recipe was so easy and SOOOO DELICIOUS!!! ABSOLUTE BOMB! EVERYONE LOVED IT!! Thanks so much for sharing! I am not sure what the RUssian sour cream is, but my husband is French, and we use Creme Fraiche A LOT in our house (which is just like sour cream, but creamier and more tart. It’s so yummy!) I dusted these little gems with powdered sugar, and then I had one with the Creme Fraiche, one with the creme fraiche and a black currant compote and one with a warm syrup drizzle. OMG!!!!… Read more »

These are amazing pancakes just like my mom used to make them all the time when I was young and we ate them with sour cream and yes you are right Russian people do eat a lot of sour cream with lots of different food. I lived there till my teenage years then, and I remember those pancakes with sour cream.

I tried it using buttermilk pancake mix from Costco and used a wok with veggie oil. Then served them with Nutella on top and jam on the side

No convincing necessary here re: sour cream–or re these pancakes! What an awesome recipe!

I am not big on regular pancakes, but these look incredible!

Russians sometimes serve tiny pancakes like these (though without the sugar I think) with sour cream and caviar. Either sweet or savory, they are amazing. Can't wait to try your version.

I hear they serve practically everything with sour cream! Someone who lived there for a few years was telling me that when you ask children what their favorite food is, they often say it is sour cream.

Fried pancakes? Don't have to tell me twice.

I love crispy pancakes- I also have yet to use buttermilk in a stack!

is the sour creme like French Creme Fresh? I love love love that stuff! these look amazing! These are going on our breakfast menu for sure! 😉

These look heavenly light , with such delicious crispiness around the edges.. Not sure what it is about the ingredients that is producing this look. As you say, it looks like a standard buttermilk pancake recipe. Must try.

The batter is thinner than your standard buttermilk pancake. I think the result comes from the baking powder and the frying process.