This super moist Cinnamon Roll Swirl Coffee Cake is worth making from scratch! Rich, moist coffee cake is swirled with a cinnamon roll filling and topped off with a simple glaze. It is to die for!

The first time we made a cinnamon swirl coffee cake was years ago from a fellow family member’s blog (that’s right, blogging runs in the family). The recipe was called Honey Bun Cake. It was absolutely delicious, and we’ve made it several times since. Her recipe uses a cake mix but we wanted a “from scratch” version, since that’s more The Stay At Home Chef style. We know how easy it is to reach for the cake mix, but trust us, it is worth the extra effort to make coffee cake from scratch.

We’ve all experienced dry, crumbly, sub-par coffee cake. It is usually store-bought and always served at a women’s luncheon of some sort. We make it a rule to avoid the coffee cake at such events because we have simply become so spoiled with this homemade coffee cake. It is super moist, and thick, and decadent….everything a coffee cake should be. The batter is quite thick, much thicker than a cake mix so don’t be surprised by that. That’s exactly how it is supposed to be.

You have a couple of different options for the cinnamon swirl. You can simple swirl it in up top like we’ve done here, or you can layer it by pouring half the batter into the pan, doing a swirl layer, then the remaining half of the batter and another swirl layer. Feel free to do whichever works best for you.

Where is the coffee? Why is it called coffee cake?

Now, before anyone gets mad about calling it a coffee cake, let’s get one thing straight: coffee cake doesn’t have any coffee in it and it isn’t supposed to! It’s called coffee cake because it is meant to be served up with coffee. The sweetness of the cake is a delightful balance to the bitterness of coffee.

This cake stays good for about 3 days before it starts to dry out. Make sure you cover it after it has been sliced into, otherwise it will dry out immediately. Store at room temperature. 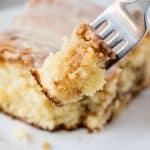 This super moist Cinnamon Roll Swirl Coffee Cake is worth making from scratch! Rich, moist coffee cake is swirled with a cinnamon roll filling and topped off with a simple glaze. This cake is to die for!
Prep Time 15 minutes
Cook Time 40 minutes
Total Time 55 minutes
Ingredients

This super moist Cinnamon Roll Swirl Coffee Cake is worth making from scratch! Rich, moist coffee cake is swirled with a cinnamon roll filling and topped off with a simple glaze. This cake is to die for!
Prep Time 15 minutes
Cook Time 40 minutes
Total Time 55 minutes
Ingredients