Cinnamon Roll Ice Cream Sandwiches are made in the waffle iron for a decadent, easy-to-make dessert that the whole family will love!

Hi, I’m Jerry James Stone and I have a vegetarian and vegan blog by the same name. I met Rachel last year when we both attended YouTube’s NextUp in Los Angeles. We were the only people there with food channels. I am excited to share my point of view on food here at Rachel’s blog, like these delicious ice cream sandwiches.   Those last days of summer are upon us and I have the perfect ice cream recipe for you to go out on a bang. These cinnamon roll ice cream sandwiches are easy to make and as delicious as they look. They will not disappoint.

Let’s face it, it’s hot out and probably the last thing you want to be doing is spending hours in the kitchen making homemade cinnamon rolls. Or even worse, running the oven! Poolside, or even just outside, is a much better option.   This recipe takes a can of cinnamon rolls and transforms them into a sticky icing-topped treat for you, the kids, or anyone. They are that easy to make. Plus, there’s waffles so this recipe pretty much counts as breakfast, right?

You may also be interested in checking out The Best Homemade Cinnamon Rolls Ever and this beautiful Cinnamon Roll Twist Bread. 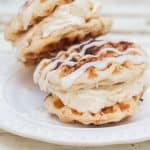