Yes, I did that. I was just sitting on the couch one day and the idea popped in my head. What if I made a bacon muffin that was stuffed with Nutella? How could it not be spectacular? I have an absurd amount of Nutella in my pantry.  I buy it in bulk at Costco and always have what seems to be an endless supply on hand. I have one of those 11 pound jars

on my Amazon wish list, but no one ever seems to take it seriously and actually buy it for me as a gift. Yes, I really do dream of having one! I promise, I’ll eat the whole thing! I just don’t mess around when it comes to my beloved jars of Nutella. I should pretty much be a spokesman for them.

So, when it comes to a recipe involving Nutella, you know I can produce something that will be spectacular. This recipe is no exception. A savory bacon muffin by itself is pure awesomeness, but when you stuff it with a bit of Nutella you’ve got a magical surprise waiting for you in the middle. 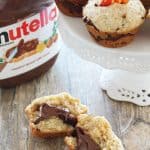