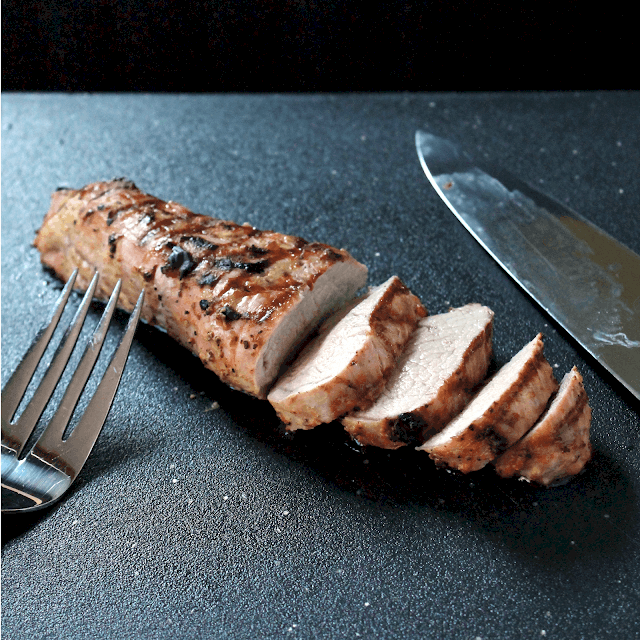 Pork Tenderloin, when done right, is one of my favorite meats to eat. It is juicy and flavorful, salty and delicious. So what goes wrong? Well, the biggest mistake people make is overcooking it. Pork can be pink in the middle. Did you know that? For decades, pork farmers have been marketing pork as “the other white meat” so much that people have started treating it like chicken. Not so people! Pork was actually a read meat before this marketing ploy and genetic engineering turned it white. Don’t freak out if it is pink in the middle. If you are truly worried then use a meat thermometer and test the interior. It should reach 145 degrees. That’s it. Chicken is a whole 20 degrees higher at 165. This recipe is super simple and one of my favorite ways to cook tenderloin. It doesn’t get any easier and the meat really sings.

1. Season the pork tenderloin generously with salt and also a little pepper. Rub the tenderloin down with the dijon mustard.

2. Heat a grill to high heat. You want it smoking hot to give that pork a nice sear and seal in the juices. Sear each of the sides for about 2 minutes per side (since it is round we’ll consider it as having 4 sides).

3. Close the lid, reduce the heat to medium, and grill for 5 minutes. Turn one last time and cook for an additional 5 minutes (bringing total cooking time up to 18 minutes), or until internal temperature reaches 140 degrees.

5. Remove from heat and let rest for 5 minutes before slicing into it. The meat will continue to cook during resting and the temperature will rise to the desired 145 degrees. Slice and serve.